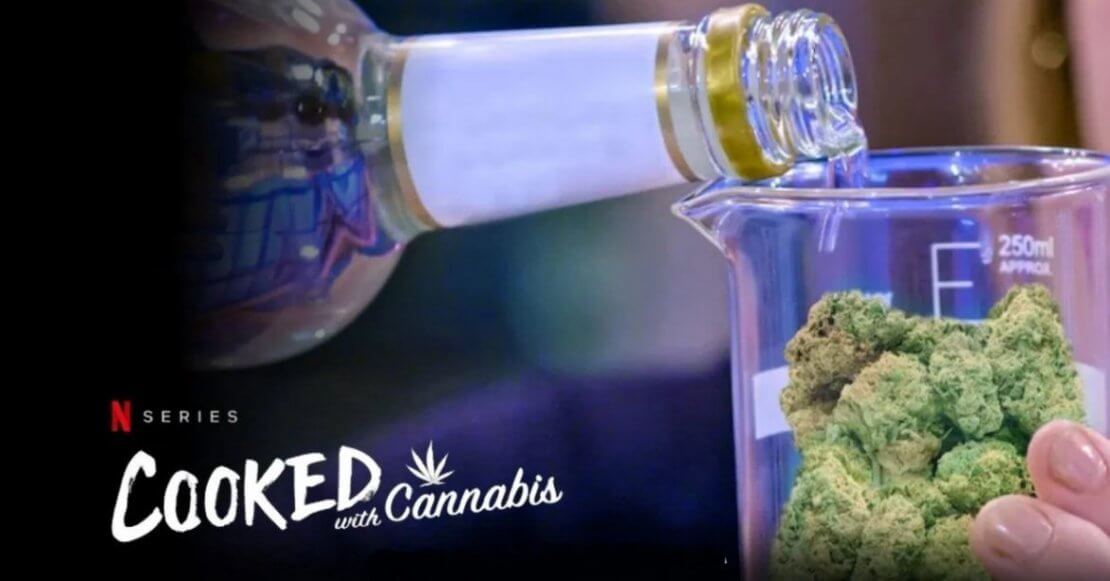 We made it to the last course! The short season of ‘Cooked with Cannabis’ comes to an end with episodes five and six. Just tuning in? You can read our thoughts on episodes one/two and three/four before diving in.

Oh, the holidays — generally a time of great eating, but also often coupled with stress. Do you know what helps with stress? Cannabis. Whether you are tense from too much family or on edge trying to create the perfect holiday gathering, cannabis can help. Episode five of ‘Cooked with Cannabis: High Holidays’ is here to teach us that we don’t need to sneak out back to “stealthily” smoke a joint. We can just incorporate cannabis directly into our favorite holiday meal. Fun for the whole family! Each contestant chose a different approach to the theme — choosing different holidays or new takes on American classics. We can tell you one thing…Thanksgiving will never be the same.

Holidays still a little too stressful for you? You can kick back with some of the comfort food from episode six: ‘Comfort Food to High Cuisine.’ Or as one contestant said, “from ghetto to gourmet.”

Episode five had a collection of some of the most chill chefs in the series, proving my theory wrong about having to have at least one “stress ball” on each episode. However, guest judge Michael Rapaport made up for it. Also, chef Derek’s profuse sweat. Both gave me a lot of anxiety. Derek was lovely, however, and his thoughts on wanting to challenge himself as a chef while being inclusive (he chose Ramadan as his holiday) made up for it. Michael Rapaport did not. Chef Liv’s decision to go fully plant-based was pretty ballsy, even though it was a bit of a cop-out to choose a different holiday for each course (IMO).

Episode six had a lineup of chefs almost as chill as those in episode five. Perhaps chef Danielle was a little too laid back as she moseyed through her cooking and wasn’t able to finish her plating for the second course – a surprising first for the series. Another first for the series (at least openly acknowledged) was chef Matthew, who had previously been convicted and served prison time for marijuana charges. This is not uncommon in the cannabis industry so it’s good to see the show not shy away from addressing it.

I’ve never thought about savory baklava – let alone one with faux meat and cannabis. But it’s all I want to try now. Actually, I want to try most of the dishes coming out of episode five. And instead of talking turkey, we need to talk about that goose Patrick made. An infused butter goose jus? Also never words I thought I would be typing together. But I would like some in my belly now, please. From start to finish, each chef in this episode presented a beautiful, well-thought-out dish and had command of their dosing and stayed on theme. *Chef’s kiss.*

If only we could say that about episode six. Comfort food can be different things to different people; so it was good to see each chef interpret the theme uniquely. But Manny was the clear standout chef of the episode. He took dishes that meant something to him, but really elevated them in presentation (the masa weed leaves!) and technique. He also had a clear command of dosing and using cannabis in different ways throughout his dishes. Danielle’s food also seemed to impress the judges and looked delicious but her thoughts on dosing were so different from all the other chefs throughout the series, and as Leather said seemed “flawed.” Matthew seemed to concentrate a little too much on comfort and not enough on turning it into high (end) cuisine. His connection to the food and the stories he told were really touching, he just didn’t give enough technical attention to the food.

“Some weed smells like peanut butter and feet” – judge Amanda Seales, on how some weed smells/tastes good…and some does not (Ep. 5)
“It stuffed my stocking” – Leather, on how the first course really got it done for him – we love a man that stays on theme (Ep. 5)
“I like this goose titty” – judge James Jones, basically the only thing he said all episode but way to make it memorable (Ep. 5)
“It’s important you taste your food” – Chef Patrick as he takes a big puff of his smoked maple syrup…important indeed (Ep. 5)
“But also I like poppin’ the Henny and a bag of Blue Dream and kickin’ back with the homies.” – Chef Manny, on what sounds like a great night…and a clear inspiration for his dessert dish (Ep. 6)
“When CBD and THC work together, they essentially create a symphony.” – Chef Manny, speaking yet another truth (Ep. 6)