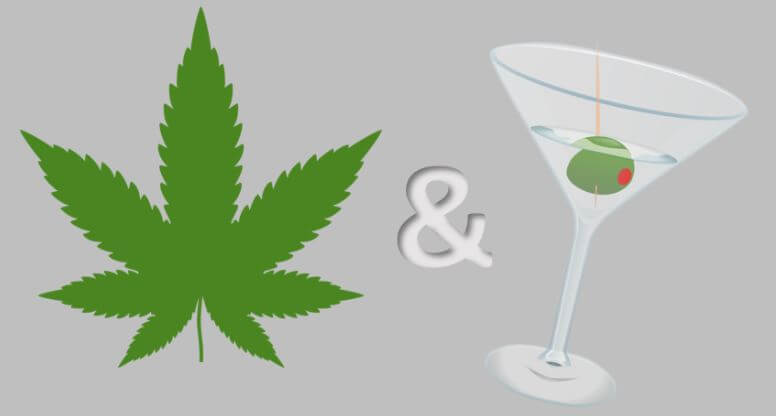 Cannabis and alcohol are two of the most popular substances people indulge in. The history of these dates back to ancient history and carries on in full force to this today. In this post, we will explore some of the main similarities and differences between alcohol and cannabis, along with how they interact with each other.

Brief History of Cannabis and Alcohol Use

Both cannabis and alcohol have been used since ancient times. Alcohol was discovered at least 9,000 years ago.

Cannabis, on the other hand, may be even older. As Carl Sagan suggested in 1977, hemp may have been the world’s first crop, dating back to 10,000 years ago. The

Similarities Between Cannabis and Alcohol

Often times, these two get compared to one another. This is because in many states where cannabis is legal, it is treated the same as alcohol.

And, in many cases, legal cannabis is controlled by the LCB (liquor and control board). These are two substances that are often used recreationally, and they share many similarities.

Can be Both Medicinal and Recreational

Both substances have long been used both medicinally and recreationally. This is one of the primary similarities between these two substances. Alcohol is generally used as an antiseptic, disinfectant, and as an antidote. These days, however, alcohol is mostly recreational.

In most circumstances, both alcohol and cannabis and alcohol are psychoactive. The only exception of this would be when one uses CBD as opposed to THC, the main psychoactive compound.

To be clear, alcohol is a lot more dangerous than cannabis. As the CDC reported, at least 88,000 deaths occurred between 2006 – 2010 from alcohol use. Cannabis use is considerably safer than alcohol and near-impossible to die from. In reality, though, both are generally very safe to consume in moderation with conservative doses.

Differences Between Cannabis and Alcohol

There are tons of differences between cannabis and alcohol, despite them getting compared a lot. While they do get compared to one another quite often, they are also very different.

Hangover and After Effects

Alcohol leads to hangovers, which can affect your entire next day. The intensity of a hangover typically depends on how intoxicated you got the night before.

Cannabis, on the other hand, does not have an intense hangover. If there are residual effects the day after, they are minimal.

Alcohol is known to have terrible long-term effects on your liver, kidney, brain function, and so on. These effects generally only occur in chronic users.

Cannabis use generally doesn’t have drastic long-term effects that compare to alcohol. However, chronic cannabis smoking can lower the amount of air you exhale with each breath (known as expiratory volume)..

The mental effects of these two substances are only similar in terms of providing a short-term mood lift. Alcohol tends to decrease any social inhibitions that were previously there.

Cannabis, on the other hand, tends to make users more introverted and less sociable than those drinking alcohol.

How Cannabis and Alcohol Interact with One Another

On their own, these two can provide some wild effects. When mixed together, these effects can be exacerbated. This is known as crossfading.

Generally, when one consumes both of these substances in moderate to high doses at the same time, you can experience the following:

However, it is important to note that using both of these substances at the same time is generally safe. In the event that you become intensely intoxicated from mixing these two substances, stay calm and hydrated. Lay down, go to sleep, and everything will be back to normal soon.

Looking for a Safe Alternative to Alcohol?

Here at Elyon Cannabis, we believe that both alcohol and cannabis and be used safely and responsibly. We specialize in premium cannabis production.